We have been experimenting with voices on the ATbar as there has been some discussion about using a male voice as this may be more acceptable to some users.  We really would value your input into these thoughts.  The English version of the toolbar now has Lucy (F) and Peter (M) and the Arabic voices are now Leila (F) and Mehdi (M).  This additional service comes thanks to Insipio and the work Lars and Magnus carried out over the last few weeks.

The return of the text to speech from the server has been reduced from 4 to 2 seconds – we will monitor whether this has an other unforeseen consequences.

Magnus has also add another plugin as standard to the Arabic and English toolbars.  A colour overlay plugin that will allow users to read websites with less glare. There is a choice of colours – cream, pink, pale blue and pale green.  We hope this will help those who have visual stress, find the glare of black on white hard to read as well as those with other specific learning difficulties such as dyslexia.  If you are using Chrome, Safari and FireFox browsers you will also be able to click through the overlay and even write with most forms.  Sadly Opera and Internet Explorer do not support a click through ability. There is a step by step guide on the ATbar wiki in English and Arabic. 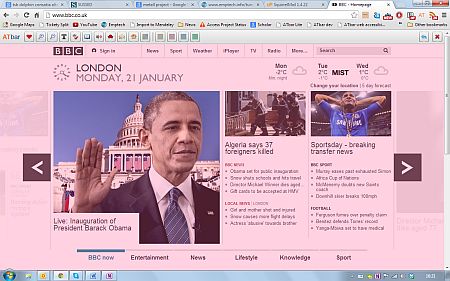 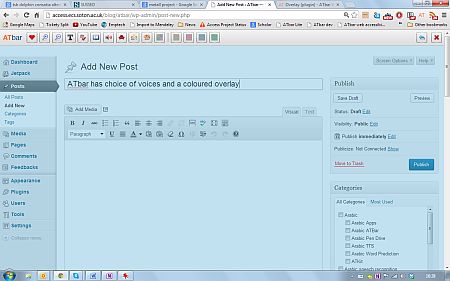 Looking to the coming months

Nawar has been working on a new dictionary that will offer users a word list that is more useful for Arabic speakers – it will be based on prefixes and suffixes with root words that may then link with Arabic Wiktionary if it exists and he is hoping to adapt the way the results are presented. It is hoped this will be finished by the end of March 2013 Magnus is working on the CSS issues that occur with some Arabic websites – we have recently been running evaluations on a series of important sites to see how prevalent the problem actually is with the poor presentation of our dialog boxes.  I will be blogging about the particular issues and we will be illustrating the results of the changes as they happen.   It is possible to change the dialog box for individual sites as has been done in the past but this is not the answer as sites constantly change so we need to find a robust solution that works for all.  This will be finished by the end of January.

TTS work has been on-going and Nawar has tried the Euler/Mbrola route which despite much experimentation has not been successful so far.  eSpeak experiments are ongoing for the desktop version and it is hoped that we can still find a solution for both desktop and  web based toolbar TTS functions by the end of March 2013.

Meetings with Mesar at ATSummit resulted in a discussion about NVDA being used for text to speech as well as a screen reader – in other words developing a way for the program to respond to selected text that has been visually highlighted as well as offer more options to reduce the verbosity for dyslexic users.

We want to have a free TTS  for the Windows system desktop ATbar when we link it to NVDA as at present the desktop version links to Narrator which does not read in all applications but offers good selected text to speech and screen reading feedback in Wordpad, Notepad, Internet Explorer and works with all individual letters typed as well as for all actions on the Windows desktop and with system operations -the help file has useful keyboard shortcuts.

The ATbar desktop version once installed launches at start up and has menu buttons for text to speech, coloured overlays, an onscreen keyboard and magnification as mentioned in our previous news update.

There is an ATbar desktop download available    There is now a portable version of the desktop ATbar that can be used on USB pendrives – the lower menu button on ATbar website.  The work on the desktop version has been completed and is awaiting any comments from users.